by Steve Towson and the Kunkala Station Band 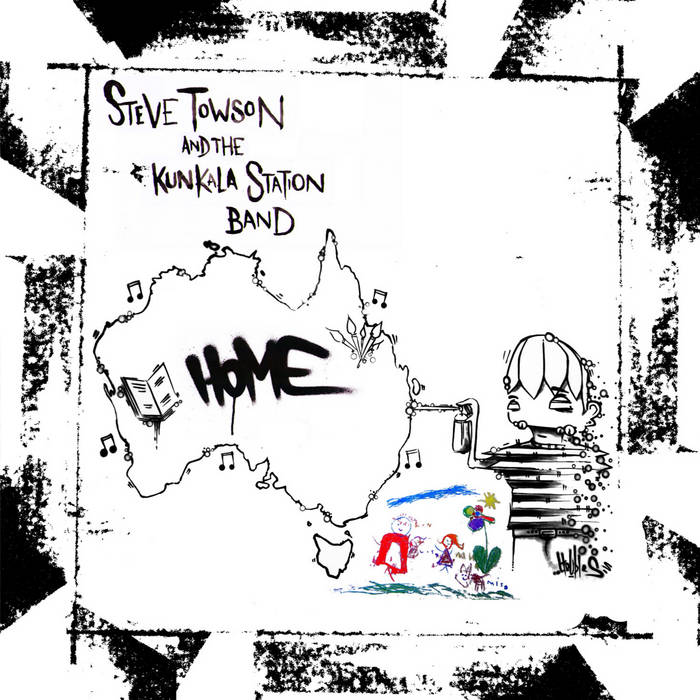 Oh, the first camp we make is down by the river.
We'll off with our swags and we'll lay the place flat.
We'll bed down the herd and before the sun rises
We'll move them again and we'll cross the Blackbutt.

So mount up your horses, let's ride into town, boys.
We'll stop at the pub and we'll drink the place dry.
We'll spend all our money on shanty-town women,
And before the sun rises, away we will ride.

The girls are so pretty; they look so enchanting,
Bewitching and graceful, they join in the fun,
Of a waltz and a polka and all types of dancing
To the old concertina of Jack Smith the Don.

So fill up your glasses, let's drink to our lasses,
Let's sing the last chorus, shout farewell to all.
And if you return to the Augathella Station,
Why, don't you drop by here and pay us a call.

[CHORUS]
Track Name: Jim Jones at Botany Bay
Oh, listen for a moment, lads,
And hear me tell me tale.
How o'er the seas from England's shore
I was condemned to sail.
The jury says, “He's guilty, sir.”
And says the judge, says he:
“For life, Jim Jones, I'm sending you
Across the stormy seas.”

“You'll have no chance for mischief then,
Remember what I say.
They'll flog the poaching hide off you
Down there at Botany Bay.”
The waves were high upon the seas,
The winds blew down in gales.
I would rather drown in misery
Than come to Botany Bay.

The waves were high upon the seas,
The pirates came along,
But the soldiers on our convict ship
Were full five hundred strong.
They opened fire and somehow drove
That pirate ship away.
I'd rather join those buccaneers
Than come to Botany Bay.

All day and night our irons clang
Like poor galley slaves.
We toil and toil and when we die
Must fill dishonoured graves.
Oh but by and by I'll break me chains;
Into the bush I'll go
And join the bold bushrangers there,
Jack Donahoe and Co.

And some dark night, when everything
Is quiet in the town,
I'll shoot the tyrants one and all,
I'll shoot the bastards down.
I'll give the law a little shock,
Remember what I say:
They'll yet regret that they sent Jim Jones
In chains to Botany Bay.
Track Name: Edimge
Edimge tugai naiser,
Me nebawam norem,
Warrem pe tugai naiser
No merbim-im-naiser.

Morning, and the tide is low.
Let's go out to the reef.
Come on brother, we must go,
For the fish await in the deep.
Track Name: Banks of the Condamine
Oh hark, the dogs are barking, I can no longer stay;
The men have all gone mustering, and it is nearly day.
And I must be off my morning light before the sun shines,
To meet the Roma shearers on the banks of the Condamine.

Oh Willy, dearest Willy, oh let me go with you!
I'll cut off all my auburn fringe, and be a shearer too.
I'll cook, and count your tally, love, while ringer-o you shine,
And I'll wash your greasy moleskins on the banks of the Condamine.

Oh Nancy, dearest Nancy, with me you cannot go!
The squatters gave us orders, no woman should do so,
And your delicate constitution is not equal to mine,
To withstand the constant tigering on the banks of the Condamine.

Oh Willy, dearest Willy, then stay at home with me!
We'll take a vast selection, and a farmer's wife I'll be.
I'll help you husk the corn, love, and cook your meals so fine.
You'll forget the taste of mutton on the banks of the Condamine.

Oh Nancy, dearest Nancy, please do not hold me back!
Down there the boys are waiting, and I must be on the track.
So here's a goodbye kiss, love; back home I will incline,
When we've shorn the last of the jumbucks on the banks of the Condamine.
Track Name: Maranoa Drovers
Oh, the night is dark and stormy and the sky is clouded o'er,
Our horses we will mount and ride away,
To watch the squatter's cattle through the darkness of the night
And we'll keep them on the camp till break of day.

Chorus: Cos we're going, going, going to Gunnedah so far,
Soon we'll be in sunny New South Wales.
And we'll bid farewell to Queensland and its swampy coolibah -
Happy drovers from the sandy Maranoa.

With our fires burning bright through the darkness of the night,
And the cattle keeping quiet, well, I'm sure
That I wish for two o'clock, when I call the other watch -
This is droving on the sandy Maranoa.

With our beds made on the ground we are sleeping oh so sound,
We're wakened by the distant thunder's roar,
And the lightning's vivid flash followed by an awful crash -
This is droving on the sandy Maranoa.

We're up at break of day and we' soon be on our way,
We always have to go ten miles or more.
But it don't do to loaf about for the squatter will come out -
He's rough on drovers from the sandy Maranoa.

We'll soon be on the Moonie and we'll cross the Barwon too,
Then out upon the rolling plains once more.
Then we'll shout, “Hurrah for Queensland” and its swampy coolibah,
And the cattle that come off the Maranoa.
Track Name: South Australia
In South Australia I was born,
Heave away, haul away.
South Australia round Cape Horn,
Bound for South Australia.

CHORUS: Heave away you ruler kings,
Heave away, haul away
Heave away, you'll hear me sing,
Bound for South Australia.

There's one thing there that grieves my mind,
Heave away, haul away,
That's leaving Nancy Blair behind,
Bound for South Australia.

I'll tell the truth and tell no lie,
Heave away, haul away
I'll love that girl 'til the day I die,
Bound for South Australia.

As I was walloping around Cape Horn,
Heave away, haul away,
I wished to God I'd never been born,
Bound for South Australia.

And now I'm on a foreign strand,
Heave away, haul away,
With a bottle of whiskey in my hand,
Bound for South Australia.

I'll drink one glass to the foreign shore,
Heave away, haul away.
And another to the girl I adore,
Bound for South Australia.